Thought Catalog is wrong. Your 20s aren’t for “finding yourself” and “trying new things”. It’s not for backpacking across Europe, surviving massive hangovers, or dancing with strangers. Not if my neighbors and relatives have anything to say about the matter. And boy, do they have A LOT to say about it. 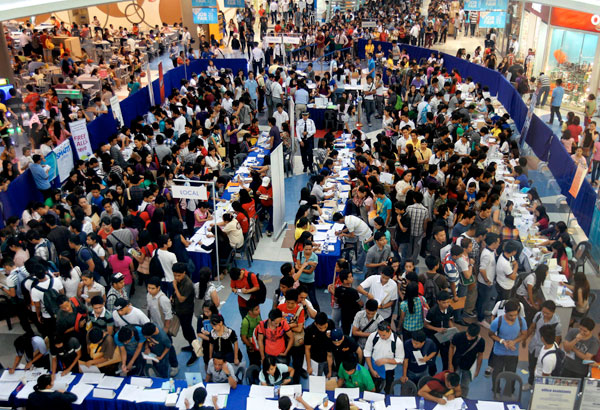 Image grabbed from Philippine Star article. (Unable to find original source, if any.)

Failure to accomplish the following list will result in some form of discrimination from your elders.

#1 Get a job with an impressive title.
Preferably one with “Manager” or “Executive” in it. Never mind how much your salary is or that everyone in your office is also called a manager.

#2 Work for a famous company or institution.
Unilever. Jollibee. Globe. If you can’t accomplish Item 1, at least make your workplace name-drop-worthy. People like to mention things like “My neighbor’s daughter works in Meralco!” to those who don’t care. It’s your duty to provide them with name-dropping fodder. Failure to do so will result in not getting Fruit Salad delivered to your doorstep on Christmas.

#3 Make lots of money.
Didn’t you hear about that kid who earned millions of dollars from an iPhone game? Why can’t you make some cellphone games? Where are your millions, Adult Who Graduated From A University And Works On Computers?!

#4 Work abroad.
Everything you do in your career is just a stepping stone to working abroad:

#5 Buy a car for yourself and a house for your parents.
Or risk being compared to the sister/brother who did.

#6 Send your parents on a vacation abroad.
Your third-cousin did it. Your neighbor’s second son did it. Why can’t you?! This is a simple matter which all twenty-somethings should be able to afford!

#7 Get a boyfriend (or a girlfriend) then get married. In style.
Right after graduation, the same people who threatened to disown you if you don’t stick to studying will get a lobotomy. They will push you on dates and matchmake you with every eligible person in a 5-mile radius.

And it doesn’t end with marriage. The next agenda in the Life of A Successful Twentysomething is:

#8 Have kids.
Otherwise, you will spend family reunions backed into a corner, listening to your almost-deaf Grandma shouting tried and tested ways to make babies. (Read: sex-talk over lechon baboy and fruit salad while your niece and nephews drop in every now and then to beg for aguinaldo.)

#9 Be a godparent to at least 10 kids.
Someone has to sponsor all the babies being made due to #8, right?

Now that you know the (slightly impossible) standards of success for your age, you can either aspire to them or just avoid all after-church chitchats, neighborhood aunt run-ins, and family reunions until you’re 30.

[Update: Since I’m an expert on being a non-successful Filipino (my score on this list is a whopping 0/9) I shared some ways on how I cope with the guilt-tripping in a separate post: What To Do If Your Elders Think You’re A Failure]

There are 42 reactions to this story, leave yours below?

← Guest Blogging, Kdramas, And The Great Gatsby5 Crappy Ways To Get Your Company Noticed Online →
Get mary’s tall tales right in your RSS feed. Share this epic tale of lies on twitter! Read in the dark. Ack! This cursed pinkness! Manlify this blog!